The Amusement Machine Show (also known as JAMMA) will soon be here and thanks to The Stinger Report we have a preview of what we can expect to see from Sega at the show. This includes:

Hummer Extreme - a new Hummer Racing game that was tested simultaneously in Japan and in the US a couple of months ago. From the translator: “HUMMER is tough obstacle to a flurry of kick. Courses on a variety of obstacles and boost the destruction MAX will boost gauge is available. Boost to win a challenge to use effectively. HUMMER face of the enclosure is only moving in housing, off-road and refreshingly realistic motion. The two handles of the two alternate, to play some of the DORAIBACHENJISHISUTEMU adopted. Couples and groups enjoying piled play” - which to translate further means that there will be some obstacle courses, a boost gauge, probably a motion based cabinet and it has two steering wheels with ‘alternate play’ much like Outrun 2 SPX had.

Touch Striker - “Shoot, pass, the movement of players, all of the actions that TATCHIPEN to make more intuitive and exciting to realize PUREISUTAIRU! ALL.net dealing with the national players who competed against. Of course, IC card with his team to customize and it is possible to record the record.” Maybe this is a touch screen soccer/football game? We’ll have to wait and see.

Answer X Answer 2 - looks like a ‘game show’ style version of the first quizzing game that can handle more players. It’s been a long time since I’ve seen a quiz game like this in the US, I’m not sure when Europe last saw one either but it would be interesting to see such a thing attempted outside of Japan again, just so we can see something a little different from the normal fare.

Star Horse 2: Fourth Ambition - we have few details on this, other than a small picture of the game setup. I am not sure how Star Horse differs from other horse racing games like Derby Owners Club or Horse Riders though.

Harley Davidson - A new motorcycle racing title that sounds like it will feature a motion base and come with a 62″ screen. You might recall that Sega did have a Harley Davidson game that they released back in 1998, this could be an update to that I imagine. We don’t have any pictures of this one for the time being, so hold tight.

And finally one that leaves me scratching my head a little: Highway Star - from the translation: “BGM-flowing game of “HIGHWAY STAR” and the like who have never heard of the 70s have adopted a number of rock songs. Uplifting players”. A move by Sega into the bemani or Guitar Freaks arena? We’ll have to see.

Also on an interesting note, Sega Amusements USA has added both Rambo and Sega Rally 3 to their main site. They have no details on either title yet but I have heard that Rambo will be at AMOA and perhaps this indicates that SR3 will be there as well.
"A única função legítima que um computador pode exercer é executar games." - Eugene Jarvis, criador de Defender e Robotron.
Voltar ao topo 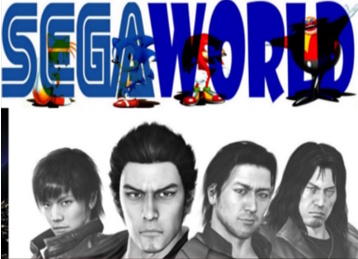