Description
A good curse makes a good game (or so they say)! turned into a half-human, half-lizard monstrosity by the Meka-Dragon, a lonesome adventurer is facing the challenge of a lifetime! In search for a cure, our mutated anti-hero will explore the many traps of Monster Land... and defeat many stuff-throwing, curse-wielding dragons. How many more transformations can one hopeful body survive, as it turns into a Lizard, a Mouse, a Piranha, a Lion, and a Hawk... The six different forms of our shape-shifting hero make up the cast of this non-stop action-adventure platformer!

Featuring
A huge interconnected world!
6 playable forms for our shape-shifting hero, with different abilities!
Dragons of all kinds! A Zombie Dragon! A Mummy Dragon! A Samurai Dragon!
An eye-patch wearing shop-keeper pig who may or may not provide a sense of warmth and direction!
Beautiful, hand-drawn animated graphics!
A memorable soundtrack, based on Shinichi Sakamoto's originals, re-imagined and recorded with classical instruments!
...and more to be announced!
History

A cult classic
We took on making a modern version of the 1989 Master System / PC Engine cult classic created by Westone (Ryuichi Nishizawa, Takanori Kurihara, Hiromi Kurihara and Shinichi Sakamoto). With the help of Ryuichi Nishizawa (Westone), Shinji Fujiwara (LAT), and a relentless commitment of DotEmu to untangle a bunch of documents covered in pixellated dustwebs, we have licensed the IP to create this new version (a first since 1994).

Imagine if Zelda, Metroid and Mario had a love child.

About the publisher
We have partnered with DotEmu to make this game. They have a long history of toying with retro licences and they were as excited as us with the idea of bringing Wonder Boy back! So excited in fact that they are literally throwing gold coins at it! Or at least enough to give us a roof! With a roof and their experience we can ensure that the game will be fantastic!

See at the bottom of this page for links and more information about DotEmu.

About the developer
Lizardcube was founded late 2015 by Omar and Ben. We previously worked together on underdog hit DS title "Soul Bubbles", a physic based game about blowing bubbles and transporting spirits.

Omar worked in Kyoto with Q-Games on the "Pixeljunk Shooter" series. At Media Molecule in England, he laid his papery fingers on the original "Tearaway" and early iterations of "Dreams". He freelanced with Wild Sheep Studios (new team led by Michel Ancel) in Montpellier on "WiLD". He maintains a popular free-software library "dear imgui", aimed at game developers of all shapes and sizes. His passion for retro Sega games led him in the last nineties to create the emulator "MEKA" and the "SMS Power!" research and preservation community which is still active.

Ben graduated from Gobelins School in Paris 2006, co-directing Pyrats short. Since then, he has been working in videogames (“Soul Bubbles”), writing his own comics (“Powa”, “Les Chevaliers de la Chouette”) and freelanced in animation between London, Paris and LA (Dreamworks, Zodiac Kids and many more).

We are partnering with Michael Geyre and Romain Gauthier to create the aural landscape of this game. 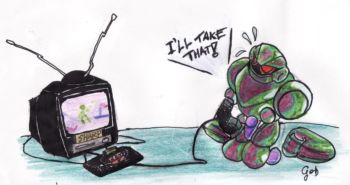