View the screenshots at the gallery.

A couple of weeks have passed since Yu Suzuki and his team have released the latest teaser for Shenmue III, but there still seems to be some details that have been overlooked. According to a recent discover by fan group @ShenmueForever , you can spot two well-known figures in the background of the teaser. 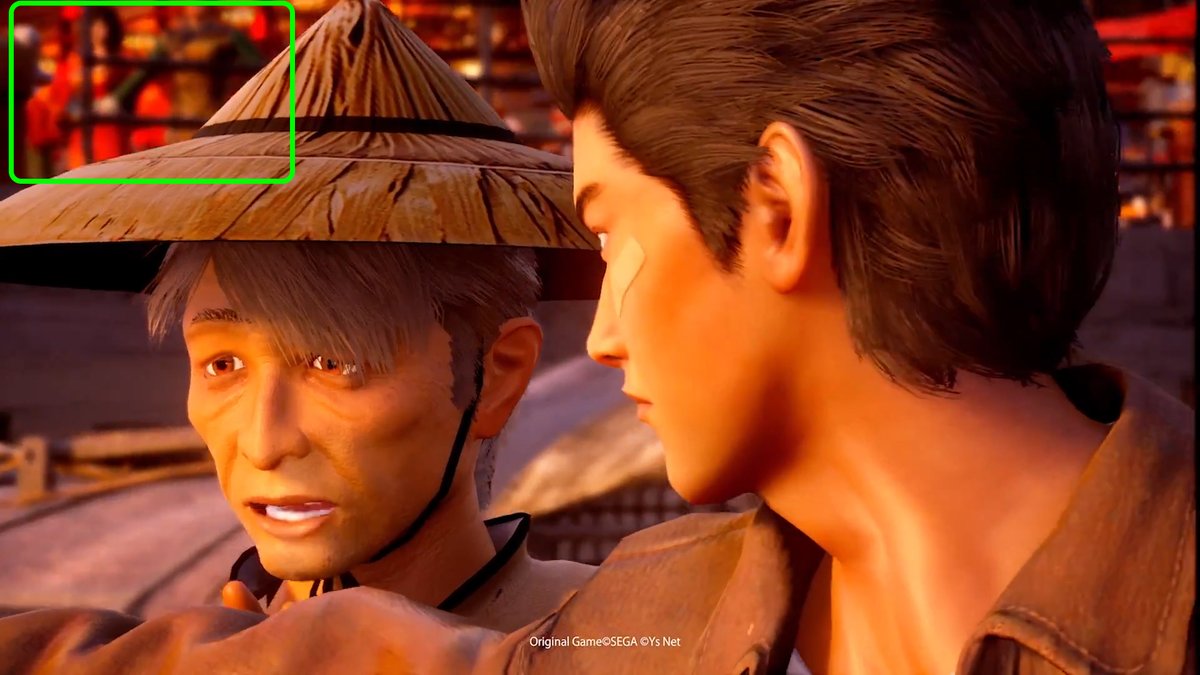 Based on the blurry images, it seems to be the figures of Niao-sun and Lan-di.

To be honest, we discovered Lan Di and Niao Sun characters by accident since we were working on a re-cut of the Shenmue 3 teaser and noticed the Easter egg while isolating the specific scene. We can’t tell for sure but it has been confirmed in some comments that the two characters in the background have the default Unreal Engine 4 character render pose (when in development environment). They have been probably put there as a nod to the fans but who knows with Yu Suzuki! What we are pretty sure is that their presence in the teaser confirms they will be in Shenmue 3.

There has been speculation for years that Niao Sun would be in Shenmue III, so it comes as no surprise to see both Lan Di and Niao Sun teased like that. Hopefully we’ll get to see both characters in action for the next teaser!

In addition to this Easter Egg, both Shenmue 500K and the Shenmue Dojo have interviewed Yu Suzuki at Gamescom and came back with some fascinating responses. When asked about the “expanded scope” of Shenmue III, Suzuki responded with:

‘It’s not simply that,’ explained Suzuki-san, ‘With the funds gathered through Kickstarter before, in actual fact it would have been quite difficult to create an open world on that budget. So ever since then I have been seeking a business partner. We were fortunate to find Deep Silver as a partner, but until that point – until finding one – it would have been too risky to work on an enhanced version, so we built the game to the original Kickstarter plan.’

‘During that time,’ he continued, ‘At first we evaluated whether our initial plan could be carried out as expected, especially since we were using Unreal Engine 4 for the first time. And there were times we would try something but it didn’t bear fruit. We’ve had a lot happening. We have carried out a lot of adjustment in various areas, up until now. The stretch goals often incorporate a lot of things that aren’t mentioned at all in their description.’

Hideaki Morishita, the game’s executive producer and acting as live interpreter for us, sought to clarify: ‘To be honest, even some things that we did not put in the stretch goals, those have been some of the very positive and good things that we have been discovering. So the team and Yu-san are really trying to adjust, and take the good pieces through discovery and put them into the game.’

Ys Net has released the the fourth volume of its Shenmue III “Development Report” video series, this time focusing on facial animations.

SEGA and Yokosuka, Japan team up for a Shenmue “Sacred Spot” guide book

With Shenmue III on the horizon and the possibility of a Shenmue HD in our future, SEGA has begun to do a little bit of promotion for Shenmue in some pretty unique ways. The Yokosuka Action Promotion Committee (which is association for the promotion of tourism in Yokosuka) has partnered with SEGA to release a “Sacred Spot” guide book.

The booklet reveals all of the real-world spots from Shenmue I, and is available in online and physical form. Here’s a translation of the description for the booklet, courtesy of PhantomRiverStone:

Creation of the Shenmue Chapter One: Yokosuka ‘Sacred Spot’ Guide Map is complete!
Enjoy the town and streets of Yokosuka and the world of the game.

It highlights places of interest from the Yokosuka townscape of 1986 in which Shenmue I is set – shrines, parks, shops and so on – that conceal the essence of that time.

We hope you’ll take this opportunity to enjoy the world of Shenmue.